The current City Council majority likes to tout its skill  in balancing the budget, but a review of recent budgets tells a different story.

Did you know that the Fiscal Year 2014-2015 Budget appropriates $139.9 million on anticipated revenues of just $132.8 million?  And that’s not all.  Every budget adopted over the past four years has been similarly out of balance. 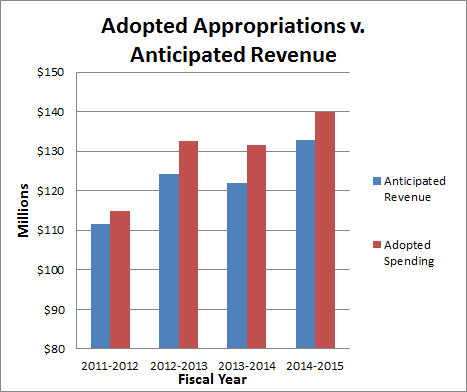 That’s right.  In four years of rising revenues, the Righeimer Council has yet to adopt a budget that balances spending and revenues.

Every budget adopted for the past four years has relied on savings in order to balance.  In four years, Jim Righeimer has never voted for a truly balanced budget, with planned spending at or below anticipated revenue. 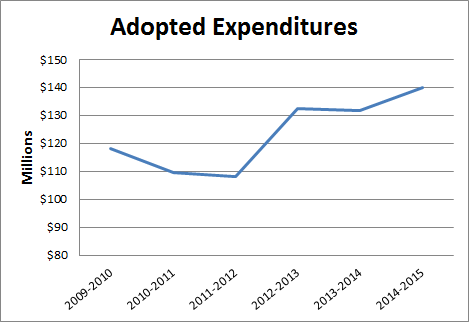 It isn’t unusual for a City to go into savings for a major construction project, as would have occurred under our adopted budgets, but the money has to be saved up in the first place. Costa Mesa could have been in real financial trouble if we’d hit another financial bump in the road.

Fortunately for Costa Mesa’s financial future, tax revenues are at record levels.   In addition, it wasn’t possible for city staff to get the money out the door as fast as some on the City Council may have liked.

So what about those much-vaunted capital improvements?

Capital improvement spending has remained relatively modest, when compared to pre-recessionary years.  In the past, the City rehabilitated as many as fifty miles of arterial streets in a single year as well as repaving numerous residential streets (2007-2008).  In recent years it's been less than half that. 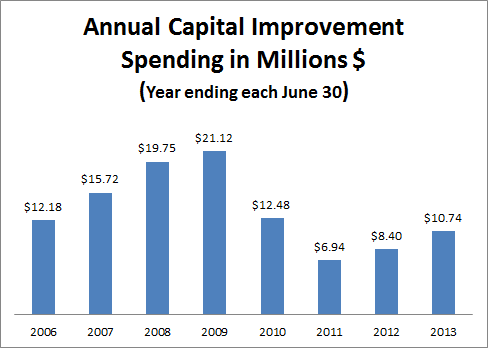 Spending is below the amounts appropriated, not yet rebounding to pre-recessionary levels.  A good thing, too.  If all appropriated funds had been spent, we’d really be in the hole.

At the same time, it is important that we maintain our infrastructure and not allow it to degrade. But as we pursue major projects we must make sure we have appropriate priorities.

City beautification is nice, but with all our other pressing needs, should that be a priority? The new landscaping on Harbor Boulevard is lovely, but is it really the best use of our tax dollars, as well as our residents' time stuck in construction traffic, as we pay contractors to rip out pink stamped concrete and replace it with rocks that look like ... er... gray stamped concrete?

Not to mention the Manolo Blahniks of the crosswalks world.   Just like Manolo stilettos, they look great, but cost a bundle and are impractical for their ostensible purpose, i.e. walking.

It Just Doesn’t Add Up

Costa Mesa City Hall has issued a press release  telling us the City will have a surplus of at least $6 million this year.  The press release also asserts that “Over the past four fiscal years, the city’s budget surpluses have added up [emphasis added] to $19.4 million.”

So our General Fund should really be growing, right?  We don’t have audited numbers yet for the 2013-2014 Fiscal Year, but the Comprehensive Annual Financial Reports (here) show less than a $5 million increase from 2010 to 2013. 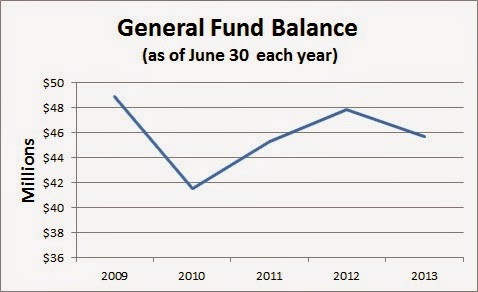 Sometimes money is transferred between different City funds.   Let’s look at the balance in all of our government funds. 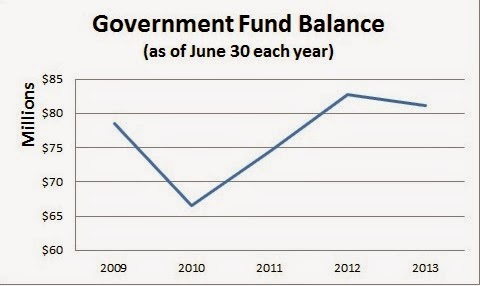 With all those surpluses, our fund balance should be well on the way to pre-recession levels.  Then why have our assets crept up so little?

We did take a loss due to closure of the Redevelopment Agency.  The City Council had little to no control over that.

On the other hand, the Council majority is crowing about revenue increases over which they had had little to no control, either.   If they want to own the up side, then they need to own the down side as well.

We also got over $5 million from narcotics asset seizures from 2011-2013.  Since it takes a few years for the Feds to process these funds, we may still have a little of that trickling in from past seizures, but with our decimated Police Department don’t expect to see much of that generated in the future.

Speaking of decimation, we also got a couple million as our share of the assets remaining in the now-defunct helicopter program.

Wow with all that money coming in, Costa Mesa should be rolling in dough.  Our reserves should be way up, shouldn’t they?

Sure, if the City didn’t spend the surplus.  In November of 2013, also before the audit was released, the City began making plans for spending the “FY 2012-2013 surplus of $7.1 million”.   Ultimately a spending plan for $5.5 million of the surplus was adopted.

We do know one thing that isn’t counted in the overall figures for government fund balance—decreases in the self insurance fund recently analyzed by Anna Vrska (link).
Posted by la femme wonkita at 9:53 PM 3 comments: