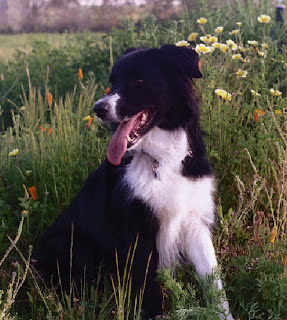 “You’ve got a lotta dog there,” people said. Harley was not small, but not really large either, at just under sixty pounds. He had incredible speed and stamina, too. But more than anything it was his heart and his mind than made him “a lotta dog”.

My friend and mentor, the late Tom Rogers, brought Harley to me from his ranch. “You’ll have to out think this dog,” Tom said more than once. Little did I know.

Harley wanted to be good, partly to please me, but from personal pride, too. The first time he was really scolded (for chewing on an electrical cord), he sat and hung his little head. He really felt bad.

From the start, Harley had a strong sense of order. He waited politely while his bowl was filled, not grabbing at the food as it was dispensed like some dogs. Going in and outside, he waited at the door for me to go first. He did it without being told, not even once. 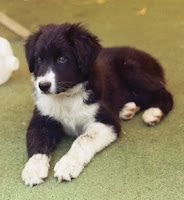 His sense of order extended to what I should do. He didn’t approve of me re-arranging the furniture. Things belonged where they were. Harley didn’t appreciate humans getting down on the floor with him, either. If I sat on the floor, he went to the Lazy Boy recliner, giving me a look that said “you belong here”. Or maybe he just wanted to climb onto the Lazy Boy, something forbidden unless a human was already there.

He wouldn’t just jump into my lap. He invented a ceremony to ask permission. He’d bring me a toy. If I tossed the toy and cheered as he retrieved it, he’d spring into my lap. If I ignored the toy, he’d settle down on the floor next to me. I, in turn, could initiate the process by singing his favorite Motown.

He had definite preferences in music, sitting under the piano as I played. Favorite pieces brought him in from the yard, just to sit and listen. Sometimes he’d sing along. He wasn’t a shy critic. If I stumbled on a Chopin etude I hadn’t played in a while, he’d get up, sigh loudly and stomp off. Oddly he didn’t seem to care if visitors’ playing was much more fractured. Guess he expected more from me.

You’re Not the Boss of Me

Walks were a challenge. I tried conventional strategies, changing directions without warning to get Harley’s attention. He returned the favor. What a fun game! My shoulders ached from pulling on the leash, and I had my share of scrapes and bruises from being yanked off my feet or slammed into posts.

Gradually, with firmness and patience things improved. A big part of that was herding class. Unfortunately, there were times it was pretty hard on the sheep, mostly due to my ineptitude. But it helped me see things from Harley’s perspective and establish my authority.

The hardest part was getting him to quit working after he was told “that’ll do”. He loved working the sheep, so much so he ran his pads off more than once, oblivious to pain until he stopped.

Harley pushed me to step up, not only to be consistent and firm with him, but to demonstrate I could take care of us both. That could mean just standing my ground as someone careened down the sidewalk with a get-out-of-my-way attitude, triggering an impulse to step aside. Or demanding that a dog owner come get his unleashed, aggressive dog as I stepped between the threatening dog and Harley, clutching my pepper spray, hoping not to need it. I’d think “did I really do that?”, then see Harley’s face, more proud than if he’d defended us: “I’m with her!” 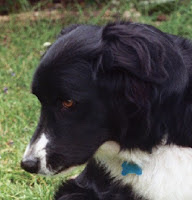 If you’d met Harley, you’d remember that face, showing a dozen different expressions in as many minutes. A face that could make you laugh or break your heart. A face that could make a large, aggressive dog back up and whimper, or calm and draw close a terrified stray, or agitate another dog thirty feet away at the dog cafe. In the blink of an eye, he could go from imperious, to absolutely cow-eyed, usually toward a cute female border collie or German shepherd.

With females, there were times Harley was outright rude, skipping the preliminaries and attempting liberties within seconds of meeting, despite being neutered. But there were times he was positively courtly, starting with a smitten look, changing to flirty as she approached, followed by a gentle nuzzle, maybe a little dancing. There are humans who could have taken lessons from Harley.

Perhaps Harley’s face was so expressive because he had such an active mind. His face could betray him arguing with himself—or the angel on one shoulder and the devil on the other. The angel didn’t always win, either, like the time Harley stole the New Year’s ham. In later years, the angel won more often. Even then, he’d sometimes slip up; as I corrected him, he’d get an embarrassed “oh, gee, I knew better” look.

Harley liked praise, but he had to feel he’d accomplished something special, too. As a pup he quickly learned to sit on command. I praised him abundantly. About the twentieth time, his face made it clear that I was overdoing it. You don’t praise a twelve year old for tying his shoes.

There’s an alley near our house, where dogs on either side would slam into the fence and bark when anyone passed. As Harley neared adulthood, it was hard for him to stay calm and not respond. The first time we made it through the alley with Harley walking quietly at my side the whole time, he gave me a look of triumph and did a little dance. I praised him lavishly. The next time, we also celebrated his success. By about the fifth or sixth time, his face let me know my effusive praise was a bit much for what had become routine for him. Harley liked praise, but not cheap praise.

When Harley couldn’t get what he wanted by demanding, flirting, or begging, he tried other strategies. The paw, the down. He noisily feigned choking to get my attention. He tried barter. If a happy, hopeful approach or sad, longing looks didn’t get Harley some of my salad or chips, he tried making a trade, bringing successively more favored toys. Sometimes it worked.

Harley loved a good joke. One day we were visiting my Mom, and the dog in the adjacent yard was barking and jumping on the fence. I kept reminding Harley not to respond—or stir things up himself. I tried distracting him, pointing at a tree, exclaiming “Squirrel!” Harley bounded to the tree, but quickly returned, giving me a doubtful look. A half hour later, the same thing, Amber barking next door, me pointing and calling “Squirrel!” Harley went to the tree but less avidly, with a “we’ll just see about that” attitude. He came back and gave me a look that showed he thought he’d been had. Stupidly, I tried the same thing an hour later, whereupon Harley acted very excited, jumping around and looking at the roof behind me. As I stepped away from the house, looking up at the roof, Harley jumped up and poked me in the ribs. He then sat gleefully, “Gotcha!!!”

Can We Keep Her, Mom?

Gracie showed up as a “temporary” foster dog. Harley was almost nine and used to being an “only dog”, though we occasionally had canine visitors stay a few days. He could be a magnanimous host, as long as visitors treated him as the superior being he knew himself to be. The first few days with Gracie ran true to form. She could share his toys, and even share me, since she was properly obsequious. After about a week he looked at me, “Isn’t she going home?”

While we were still trying to find her a home elsewhere, Harley eventually decided otherwise. One day, Gracie was unruly, and I put her out in the yard. Harley and I stayed inside. A few minutes later, Harley went to the door and whined. Thinking he wanted to go out, I opened the door. He stepped back from the door. He looked at me, looked at Gracie, looked at me, looked back and forth again, “Can’t she come in? Please?” Gracie was ours. 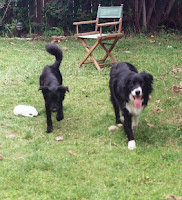 Harley was a big help training her. He set an example, being extra careful to maintain good manners himself: “This is what we do here”. He intervened directly, too, nudging her back up the curb if she stepped into the street. If she was not properly respectful he’d discipline her in that time-honored, humiliating doggie way.

Harley was delighted to have Gracie play Sancho Panza to his brave knight. He was very protective of her. Woe betide anyone, dog or human, who might hurt Gracie.

And they played. Chase, keep-away, tug, king of the mountain. So fun to watch, I almost felt left out at times.

I’ve already written too much, but at the same time not enough. How can one sum up a lotta dog in a few hundred or even a few thousand words?

There’s so much more: So many joys, trials, too. Harley hated fireworks and adored children. He could be territorial and overprotective but gentle and friendly with the homeless people everyone else shunned; sometimes reserved and aloof, but tender and comforting with someone in pain. He tolerated indignities from puppies but piddled on adult dogs who crossed the line. He invented games and played jokes. He brought me my shoes and sometimes even socks, an embellishment he figured out himself. He slept at the foot of the bed, always with his head or a paw touching my leg, ready for hugs first thing in the morning.

Our adventures: long hikes; trips to the beach. Harley fending off a pit bull that jumped us from behind. Harley teetering on a piece of plywood when the ground gave way near a construction site. He wouldn’t step over a snake, even a dead one, but happily jumped back and forth across deep gullies. He loved rolling in stinky stuff. Harley climbed trees. He helped himself to fruits and vegetables from the garden, and conned me into knocking apples out of the tree. He jumped into fountains at Fashion Island and Target and loved his play pool, but hated baths, though went into the shower on his own when I got his towels and shampoo, the last time so heartrendingly.

It took two kinds of unrelated cancers attacking Harley’s body to bring him down. The last day, he was so weak I brought a bath towel to use as a sling to help him up and outdoors. He saw me with the towel and, mistaking my intention, struggled to his feet and into the shower. He tried so hard, right until the very end. But the cancer was stronger than even a lotta dog and it was time to let him go to his rest. 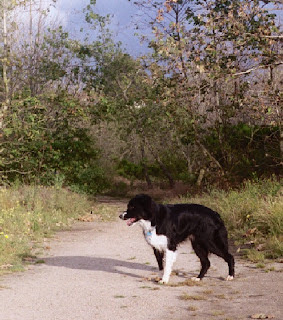