There's Still Crime in the City

The data on attrition from the Costa Mesa Police Department are pretty dismaying.  (http://abubblingcauldron.blogspot.com/2014/02/city-releases-pd-statistics.html )  One might think the report will be the wakeup call we need to develop a more cooperative relationship between the whole City Council and our officers.  Maybe we can move forward to rebuild the PD in an atmosphere of mutual respect and understanding.  Wouldn’t that be great?

Unfortunately, I’m not real hopeful.  This is partly due to council members’ past attacks on our police in the press and a continuing atmosphere of recrimination.  I’m also pessimistic because of some council members peculiar understanding of the police function as stated by Jim Righeimer at the City Council meeting of January 21 , 2014  (Video at 2:11:27)

“We have to have a police department in place.  We have a fire department in place.  They cost so much to have the fire department there, to have the trucks, to have the equipment there.  It costs us every single day, whether there’s one fire or no fires.  We still pay for it.
“For a police department you pay for it every day to have that police department there.  If they’re driving around and doing patrol checks, they’re doing whatever they’re doing, they’re there.  They’re ready to do something.  Call it “on call” time.  It’s the time that it takes just to be there.
“We don’t say there’s an activity, call up somebody, have them put on a uniform and come on down.  We put them in place.
“That’s your cost of doing business.  Any company, whether you have a repair business, that you go repair something.  You don’t say, “What does it cost for that person to come down to fix the refrigerator?  Well his time is $21 an hour.  We’re gonna charge, you know, the $21”.  There’s the cost of the truck, the equipment, all that, and even time when that person may not have a call.  We’re still paying for that person’s salary.  It’s no different in the police department.

An officer on patrol is just “ready to do something” and “on-call”?  Like a plumber waiting for someone to call about a leak?

The above explanation of the police function is both stunning and illuminating.  If time between calls were truly down time, then it would make sense to slash the number of officers, as was done adopted in 2011 (Police Bear Brunt of Budget Axe) .  After all,  they're just on standby, aren't they?

Golly, if patrol time were really “on-call” time for officers “ready to do something” why even have the officers driving around in patrol cars?  Why not just have the officers “in place” at doughnut shops around town and have them wait “on-call” there, like Andy and Barney hanging out at Floyd’s Barber Shop or the Bluebird Diner.  Think of the fuel and wear and tear on police cars we could save.  Reduced greenhouse gases, too!

This viewpoint fails to acknowledge the role of police in crime prevention and education.  It fails to acknowledge the effect of police patrol, in particular, on crime prevention and deterrence.  Numerous studies have shown that directed patrols result in a reduction in crime.  It makes sense that potential miscreants will be less likely to commit crimes if they see police heading their way, or even if they think there’s a good chance police will be heading their way.

And how many of us have slowed down on the highway after spotting a patrol car in the next lane?  Studies have in areas from Ohio to Texas shown the value of increased patrols in reducing traffic accidents and traffic fatalities.  Meanwhile, in shorthanded Costa Mesa, we had seven traffic fatalities in Costa Mesa in 2013 after having none in 2012 and four in each of the preceding three years.  It's not just a matter of responding to crime, it's maintaining public safety.

The reactive policing model neglects the value of community policing in establishing relationships and police legitimacy.  Not only will people be more likely to call the police and cooperate as witnesses if they know and respect the police, they will be more likely to obey the law in the first place.  As stated by Lawrence W. Sherman in Policing for Crime Prevention  “a growing body of research suggests that police legitimacy prevents crime.”

A factor in establishing a sense of legitimacy would be positive encounters with local officers.  Officers rushing from call to call might appear brusque and disengaged, when they are actually just under time pressure.

One might wonder how repeated comments denigrating our officers on the radio and in the press might affect perceived legitimacy of the police as well.

After the January 21 Council meeting, I got in my car pondering the vast gulf between our viewpoints regarding the role and function of police.  Neil Young’s Freedom was in my CD player.   There's Still Crime in the City  started to play. 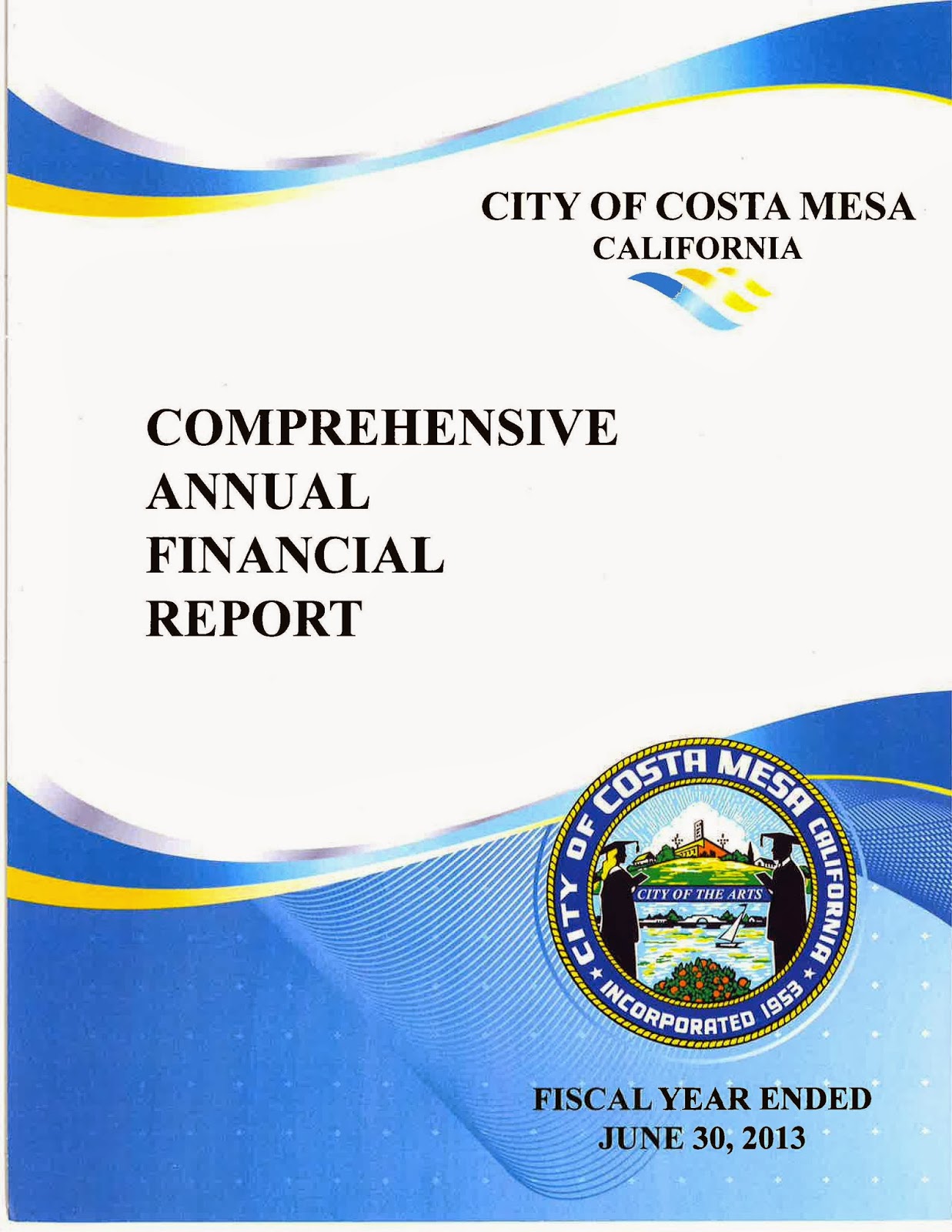 As many have focused on the financial reports for Costa Mesa’s 60th Anniversary kickoff celebration, the City’s Comprehensive Annual Financial Report has been released.  It can be viewed here .

The good news is that total revenues of $121,363,178 exceeded expenditures of $111,012,567 by $10,350,611.  Unfortunately, the City also took an unusual loss of over $10 million, mostly due to writing off the long term debt owed the city by the Costa Mesa Redevelopment Agency which, due to State legislation, no longer exists.  The debt has been deemed unrecoverable.

The Single Audit Report is also available and may be viewed here.

The auditors, White Nelson Diehl Evans LLP, found no evidence of any wrong doing but had this to say in their cover letter dated December 26, 2013:

In another letter, also dated December 26, 2013, the auditors urged that the City adopt an ethics policy, stating that:


"a structured ethics policy establishes organizational standards for ethics, morals, and an overall 'regard for the rules' … within an entity."

I will definitely be looking into this further, and encourage local residents to continue to monitor City spending.
Posted by la femme wonkita at 3:43 PM 3 comments: